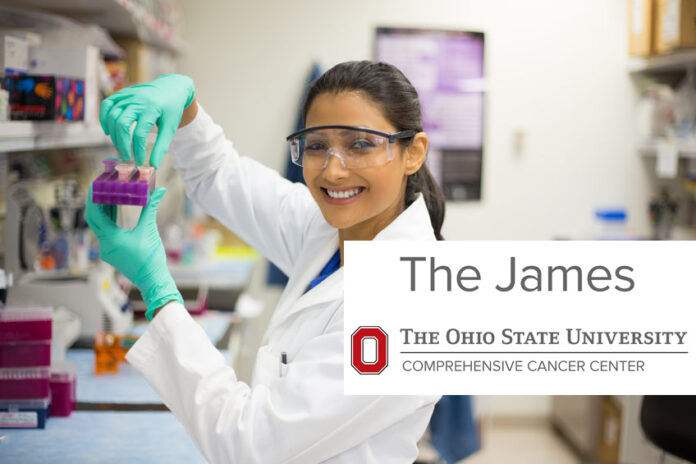 Researchers at The Ohio State University Comprehensive Cancer Center – Arthur G. James Cancer Hospital and Richard J. Solove Research Institute (OSUCCC – James) say they will have a cure for all forms of cancer in just 400 years. The announcement came at the kick-off event for their new fundraising campaign that will aim to fund research for the next four centuries.

With an annual budget of $250 million, the OSU cancer research teams estimate they will need approximately $100 billion to reach their goal.

“We are really, really close,” said OSUCCC Communications Director Gentry Perry. “Four hundred years seems like a long time but that’s about how long it has been since slavery first started in America, so when you think of it like that, it really isn’t that long. Especially when you consider how monumental of an achievement this will be for mankind. It will be morally superior to slavery but just as good for the economy.”

“I’m glad the researchers at OSU are so confident and excited for 2420,” said Lucinda Rochester, a patient suffering from stage three breast cancer. “But it feels like they are spanking me where my gown ends while I wait for a cup of ice chips. I can’t even keep a pudding cup down.”

“They ordered and billed me for a bike I don’t even want and can’t even ride,” Nohnutz said. “They contacted family and friends who don’t even visit or call, then convinced them if they don’t drop a grand on a Trek and ride in the coming Pelotonia they’ll kill me before cancer can. They keep calling me Lance Ain’tstrong and it isn’t fucking funny.”

“I know a lot of people are out there crying about how hard cancer is. But they have a victim mentality. Finding a cure is our religion here. We profess to take it very seriously. Some people would say Ohio State is the Catholic Church of Cancer, and I think that’s swell,” Boner said. “Everyone’s going to die, even me. It’s what we do with our lives that leaves a legacy behind. My hospital will be standing erect and virile long after my underlings and I die of uncured cancers. Your bodies too will return to dust, but your dollars are forever, and you can’t take them with you. We need them here. We need everything you have and more right this very instant.”

One critic of Boner’s and Ohio State’s, Andre Mohican, director of the local nonprofit Actually Helping People, likens them to the military-industrial complex.

Boner said that critics of cancer research fundraising don’t understand the sacrifice and commitment required to continually raise money from well-intentioned people who think they’re dealing with Jesus and not a corporate salesman. He says all of the work is necessary to raise the money to attract the best talent.

“Will we waste a few billion dollars on buildings, oddly-shaped furniture, Andy Warhol prints, and Brita filters? Absolutely. Will we waste a few billion more on cold brew coffee dispensers in the lounges, truffle-fed lobster-braised escargot for our faculty cafeteria, and aerial tramways that ensure our staff never have to step foot on the ground? Yeah, it’s the way things are.” Boner said. “Because we must attract the most ambitious, highly educated researchers to achieve our goal of finding a cure, and those people rightly demand the finer things in life, these expenses are not just necessary but life-saving. Those lobster-braised snails will save lives.”

A tour of the research laboratories during the event showcased dozens of researchers peering into microscopes, adjusting dials, and writing down numbers on clipboards.

“It is very demanding work. We still have to use our eyes because computers can’t do that for us yet. A lot of cancer researchers have to have eye replacement surgery. We see a lot,” said lead researcher Dr. Henry Barstow, hunkering his back, craning his neck downward, and peering into his microscope with his good eye. “The cure is down there somewhere. If I look long enough, I might catch it floating by. That is the job. It is my life’s work. I hope I have 400 years of life left in me to see it through.”

Many researchers at the institute believe their status as God’s chosen scientists has granted them superpowers and biblical lifespans. OSUCCC Vice President Judith Methuselah is rumored to be 969 years old.

Asked why it would take 400 years to find a cure if the job only consisted of waiting for something to happen in a microscope, Barstow said he wasn’t sure.

Local resident John Lushbum wondered whether the world as we know it will even exist 400 years from now.

“If you consider pollution, overpopulation, increasingly divisive bi-partisan politics, rampant anti-intellectualism, commercialized food production as well as waste, mental illness rates, socio-techno-political control of the individual…Jesus Christ! If you consider anything at all, nothing fucking matters by then,” Lushbum said. “Only the assholes at Ohio State would overlook all of that to service themselves 400 years into the future.”

Slaves Owned By Dr. Seuss Speak Out For The First Time