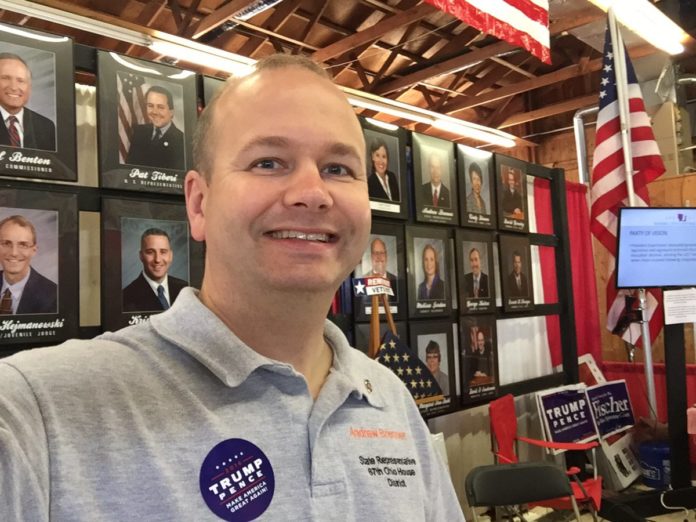 Delaware County GOP officials recalled State Rep. Andrew Brenner (R-Powell) to their downtown headquarters this weekend to run diagnostics and upgrade his firmware ahead of the 2018 election cycle. Brenner is running for State Senate and will face his first test in the May 8th primary.

Rep. Brenner, also known as Brenner Bot or Brenner Boy, is an AI-powered humanoid robot that has been owned by the Delaware County Republican Party since 1980.

The 7.0 version release of the StatQuo intelligence software included several large upgrades along with numerous bug fixes and adjustments.

“What we’re doing is building ourselves the perfect candidate,” said Central Committee President Enrique Inglesias. “The one that will best serve the needs of Delaware County’s most powerful, influential citizens, even if it’s at the expense of everyday people or meaningful progress.”

Election season software updates are generally focused on enhancements that help the bot candidates respond to current events and societal changes. For example, the Sexuality Module was fine-tuned to limit Brenner’s attraction to women and force more formal, conservative interactions with the opposite sex. These changes are designed to help shield Brenner from the backlash that may arise from any corny behavior, touching, or prolonged grandstanding.

“Brenner has never been accused of improper sexual behavior, but in today’s climate, you can’t be too careful. It used to be funny to have those settings tuned in the other direction, where we were actually encouraging more awkward, inappropriate interactions that we could all get together and laugh about,” Inglesias said. “But those days are over.”

The robotics program was the brain child of Donald Wuertz, a former elected official and venerable member of the Delaware County Republican Party for more than four decades until his retirement in the early 2000’s. Wuertz, former Mayor of the City of Delaware and Delaware County Commissioner, envisioned a future where the party had a stable of loyal, dependable operators who had zero empathy and were completely under donor control.

Brenner Bot began operating in 1953 as an actor robot owned by Colombia Pictures, performing under the stage name Rick Moranis. He was purchased by the Delaware County GOP in 1980, just a few years prior to landing his first major film role, 1983’s Strange Brew. Brenner went on to earn national celebrity in blockbuster films including Ghostbusters, Spaceballs, Little Shop of Horrors, and Honey, I Shrunk the Kids. At that time, the technology was focused on lifelike facial expressions and mimicking human behavior.

Brenner is one of several androids controlled by the Delaware County GOP, and currently the most prominent. Due to his Hollywood career, he is often referred to as the “Ronald Reagan of Delaware County.”

“Yes, Delaware County’s Little Ronnie Reagan with a Learning Disability, that’s correct. We call him that,” said one Delaware County GOP official who wished to remain anonymous. “He’s perfect for us. After his lucrative acting career died down, we used his celebrity to get him elected to office, and he’s been a blunt instrument for us ever since.”

Brenner has a success ceiling imposed by his software to ensure he remains focused on serving local interests and does not draw attention as a potential candidate for national or statewide office.

“We learned our lesson with Yost, who we lost after he won the State Auditor’s race several years ago. And we almost lost Tiberi to a U.S. Senate run before we decommissioned him. We technically have control but the machinations of politics are such that at a certain point, the County party is muscled out of the way,” the anonymous official said. “So we’ve had the geeks really focus on this and code in features that make Brenner Boy look less attractive on the big stage. If he gets in front of a crowd that’s more than a few hundred people, for example, he starts to break down and fails to perform. We make him dissolve into a blubbering idiot for a few minutes; just long enough to leave an unsettled feeling in the pit of your stomach.”

“It’s one thing to like a guy and believe you can influence him,” said Inglesias. “It’s another to know you have complete control over him and that he can never fuck your wife. His balls are in our hands.”

Brenner is prevented from becoming aroused in the presence of women with ties to Delaware County GOP donors or Central Committee members.

Commenting publicly for first time since his upgrade, Brenner said he was feeling good about this year’s race.

“I feel great. I love this county and it is my sincere honor to serve. I look forward to sharing my dedication with all counties in the 19th State Senate District,” a statement read. 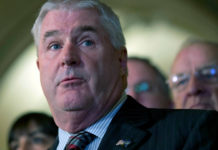