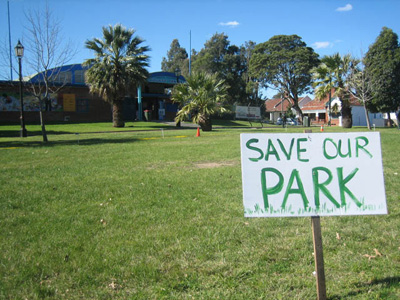 A Delaware man was arrested for disturbing the peace after he was found tearing handfuls of grass out of the earth at Blue Limestone Park Wednesday afternoon. Witnesses said he yelled that he was “taking the grass back” from the city because the “government took his yard and gave it to all the freeloaders in the park.” Many park regulars are worried that there is a larger movement trying to “take the park back.” This is the third man arrested for the crime in the past two weeks. If you have any information about this radical group, please contact Delaware Ohio News.

Five young children were arrested on suspicion of planting homemade “Romney/Brush 2012” signs in the Lexington Glen residential development on Tuesday, after multiple residents filed complaints with police. The children, whose ages range from 6 to 12, all told police that Councilman Andrew Brush gave them his weekly allowance to plant the signs because he was grounded for a week for playing Army men while he was supposed to be working on the city budget.