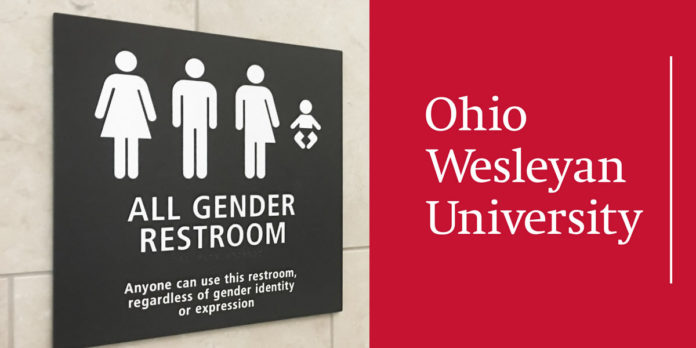 Director of Communications, Pole Clasper, says the remodel was designed to accommodate the University’s transgender, genderfluid, and agender student population.

Campus-wide, lady-dicks and boy-pussies are rejoicing at the newfound freedom to pee and poo in peace, without fear of judgment, discrimination, or justified violence.

Strong supporters described their stance to The Delaware Ohio News team, who stared at their tits the entire time. Here are their statements:

“Urinals are trans-exclusionary, sexist, and yet another symbol of facetious-ism in society. That’s why we bullied the administration into an enormous and expensive construction effort, and didn’t even say thank you.” – Ima Ruudaas

“Requiring someone to physically possess a penis in order to use a plumbing fixture in a public place is an example of being a horrible fucking person, a degenerate that deserves execution without trial.” – Sarah Cuntmuther-Rosenberg

The school changed traditional restroom signs by altering the representative stick-figures. There used to be a triangle one for chicks. The other one was just regular and it was for dudes.

The new signs will be identical, displaying stick-figures with gauged ears, partly-shaved rainbow hair, both sets of genitals, donning both a dress and pants. Further, student consensus agreed upon the smiley emoji to replace the formerly featureless stick faces.

Not everyone cares about their fellow students’ delusional behavior and unchecked sense of entitlement, however. Seemingly concerned more with the repercussions of the remodel, or with the technical side of the changes themselves, some students are mildly but justifiably irritated.

“I am just glad they stopped verifying our genitals. My girl stopped fucking me months ago because she was tired of flashing her snatch to the Puss-n-Peenie Police every time she pissed on campus. My balls are permanently distended, but prayerfully– now– it won’t get much worse.” – Chase Carpet

“Some students quite literally cannot get to class. How can the University baby the middle-class whiner but tell the paraplegic to get up off his lazy ass and walk, or make other students feel bad enough to carry his wheelchair up the Slocum Hall stairs?”

Interestingly, the data pooled revealed that 100% of OWU students are autistic.

“I don’t care about the opinions of my students. Besides, handicrappers– or, as I like to call them, wheeliedoos– are simply too silly to learn stuff. Eileen can hardly stand up straight; why would I listen to it?”