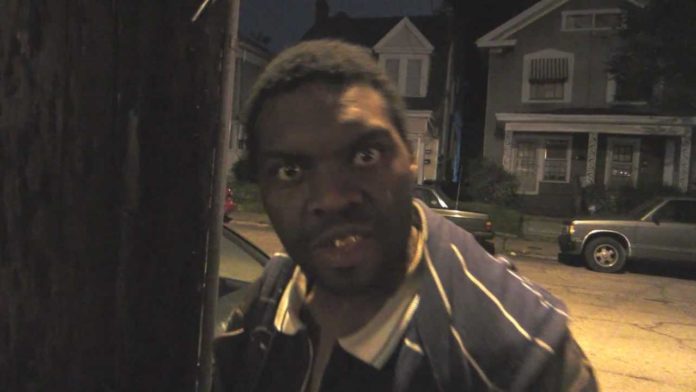 It took about three days for Booth to make the transition from being an obscure drug-addict babbling advice to imaginary friends to becoming a popular, critically acclaimed advice columnist for delawareohionews.com.

“These three freaks just busted up in my crib, threw my black ass out my sleepin’ seat and tol’ me that it be in my best interest to come wit em’,” Booth said. “I, I, I, I grabbed the copy of my printout social security card, my gat, my army medals, and my last bag of rock and headed up norf in the bed of their truck to a betta life. The truck even had a cap covering tha bed, and some shit to sit on n’ such.”

Booth did not always live in an abandoned railroad car in the slums of downtown Columbus. He grew up in a dilapidated crackhouse in the slums of downtown Columbus until the age of seven, when a train ran off some nearby tracks and demolished several of the houses in his neighborhood, including his own. Everyone in the other four affected homes survived the accident, but seventeen of the eighteen inhabitants of Booth’s house met their demise.

“Those mothafucka’s got it somethin’ cold. The delawareohionews.com team really hooked me up, though. I was fixin’ to lose my shit and was thinkin’ I’d never cop again due to my cash flow situation and all. And, all the good pan-handlin’ spots got snatched up. Ain’t no where to squat, all these homeless niggas out here occupyin’ shit up,” Booth said, frantically scratching his ankles. “The new crib, typin’ job, and having a good connect at the BP across the street from the Gazette building has really come as a blessing in camouflage. Probably from Jesus, who is blacker than I eva was for the record.”

Booth, feeling rejuvenated and refreshed, has taken on the task of producing one of delawareohionews.com’s most popular website features, “Ask Oltice”. The DON team seems to think that there is some really deep and intellectual reasoning behind Booth’s life theories, and relish in the fact that they have an opportunity to share his ideas with the world.

“He’s right, he always has been. He just never had the chance to get a good firm grip on life and it’s held him back.” said DON senior reporter Ricardo Paye. “When I first moved to the east side, some guy approached me from a few houses down the street and offered to mow my lawn for $15. Of course, I let him. The following day, Oltice introduced himself and explained to me why it would be better to hire him to mow my lawn at $10 a cut. He seemed so much more enthusiastic about it, too, whereas the first dude I hired was just desperate for booze and cigarettes. I hired him on the spot. Not only has he saved me cash on lawn care, but he’s taught me lessons that will help me grow as a writer and as an individual. It’s a privilege and an honor to be working and swigging ‘frog juice’ with the man”

Others completely oppose Booth’s ideas, and his employment at the city’s most trusted news outlet.

“I think the character Oltice was made up to encourage a morally devoid outlook on life and I think that’s just plain wrong,” said Dottie Micheals, local stuck-up, chicken-head cunt. “It’s absolutely despicable that this community will potentially be influenced by such a character that encourages women to set their husbands on fire on a boat and push them out to sea after murdering them. Not to mention, he’s black.”

Booth said he doesn’t really give a fuck whether the community gains or loses anything from his life stories, quotes, or advice.

He also said he most certainly doesn’t care if anybody judges him, or if he is viewed as a successful writer by his peers.

“We all know that black and white don’t shit on peanut butter,” Booth said, swaying from side to side. “How can the sky be the limit if I don’t even know where the fuck I’m at?”