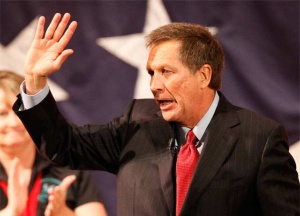 Ohio teachers and students would be required to carry a state issued handgun or assault rifle under a proposed law introduced by Ohio Governor John Kasich during his State of the State speech Tuesday night in Lima.

Coming in the wake of a wave of gun violence and increasing calls for gun control, Kasich said he and NRA officials are adamant that more guns are indeed the answer, and they believe there is no better starting point than our schools.

Under his proposed legislation, all students above the age of eight would be issued a Glock G306 and holster, and be required to handle the weapon at all times during school hours. Teachers would be given a fully automatic AR-15 assault rifle, to be propped up and loaded next to the chalkboard. Students and teachers would be mandated to engage in target practice daily, and be subject to reacting to monthly school shooter attack drills performed by a harmless black robot.

Delaware Ohio News reporter Oltice Walker Booth asked why the robot had to be black.

Governor Kasich said it is obvious why the robot is black, smirked, and said he is more worried about all the “racism” against firearms coming from “liberal gun-hating bigots.”

“Why hasn’t anyone interviewed the handgun to see how it feels about all this discrimination?” Kasich said. “I talk to my magnum every night, and let me tell you, they’ve felt like a target, and have been under fire from aggressive liberal assholes for too long.”

Asked about how children could be trusted to handle such dangerous weapons, Kasich introduced Brent Johnson and his six year old son Brian, a home schooled cub scout and aspiring sharpshooter.

“Every Sunday, Brian is escorted by his father to a local gun range where he’s taught how to handle, maintain, and fire his BB gun. Time has been set aside to teach Brian the fundamentals of self defense, and he understands the power of his weapon,” Kasich explained.

“We aren’t trying to raise more killers. We aren’t building a child army. We’re just cognizant of the reality that our children our at the forefront of our war on school shooters,” Kasich said. “It is obviously impossible for us, as adults, to take action to solve this problem ourselves.”

“As a result, when you ask Brian how he would respond to an intruder breaking into his home, his answer is simple,” Kasich said, handing the microphone to the child.

“Bang bang bang, dead nigger,” Brian said, which prompted loud cheers from the crowd in Lima. Kasich gave the child a high five before jumping off the stage and crowd surfing back to his limo.

Surprisingly, there are already many opponents of the proposed law, most vocal among them Democratic Senator Sherrod Brown.

“I am genuinely fearful for the lives of all Ohioans,” Brown said. “Kasich learns about a six year old with a BB gun and reasons that every student in the state can carry a police grade firearm? The fact that this law even has a chance of passing makes me happy I don’t have a handgun right now, because it would be in my mouth.”