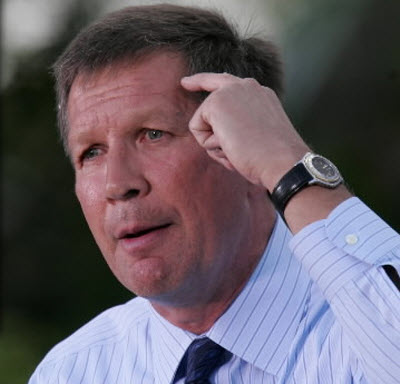 After the crushing defeat of Senate Bill 5 on Nov. 8, Governor John Kasich is proposing a new bill to the Ohio legislature, which would require all public employees to pay a 15% income tax directly to Kasich’s own gubernatorial staff.

“I understand that the people of Ohio have spoken, and they don’t want public sector middle class families to lose their collective bargaining ‘rights,’ (Kasich used his fingers to make parenthetical bunny ears, snickered and swigged a bottle of Johnnie Walker, Blue Label) but they obviously want other hardworking government employees such as my huge staff to get a piece of all of their freebie bullshit,” Kasich said.

Kasich also said public employees barely ever throw their spare change into his gubernatorial “Jesus Fountain” which was built outside the Governor’s mansion during his inauguration.

“These entitled, spoiled, disdainful teachers, firefighters, and police officers need to realize we won’t idly stand by while I can barely afford to give one of my 12 interns another Bombay Sapphire Martini,”Kasich said. “They need to realize that even though they may have avoided the Sandusky-esque ass raping in Senate Bill 5, they deserve, and will hopefully receive, a big, hard, Republican Senate Bill 69 dick down their throat in 2012.”

Reynoldsburg businessman Dan Yorwell said he thinks Senate Bill 69 should let those “sneaky teachin’ types” know that the upper class is on to their “free ridin’ shenanigans.”

“I’m tryin’ to run this coal company while the Marxist, atheist, fetus-killin’ schools are teachin’ that fossil fuels are harmful to our environment,” Yorwell said. “I can’t believe that I pay less than one tenth of one percent of my salary to finance these smarty pants breedin,’ God-killin’ ‘schools.’ Makes me wish I would’ve studied law, if I could read.”

“We are Ohio” spokesman Jan Davies said the group will fight the injustices included in this bill just as aggressively.

“If Kasich thinks we are going to be happy with just stomping the fuck out of SB 5, and then letting him receive taxpayer subsidized blowjobs in his Jesus Fountain, he is mistaken,” Davies said. “We will stand outside the state Capitol, play our flutes with might, and wait until the Republican controlled legislature passes the bill, at which point we will get angry and decide to get a bunch of signatures that will hopefully repeal this awful act in the next election, instead of fighting for a Constitutional amendment to recall objectively harmful governors. Kasich can’t possibly do anything worse than this, right?” Davies said.

As of press time, the Kasich campaign has vowed to enact at least twelve less publicized policies that will undermine the state’s working class, crush our already debilitated economy, and make sure his staff receives their constitutional guarantee of one diamond encrusted genital scratcher per member.

“Occupy this, motherfucker,” Kasich said, while scratching his hairy, crab infested balls with a Spongebob Squarepants toothbrush with diamonds for eyes. “I’m not even close to bein’ done with you dumbass Ohio State lovin’, Blue Jackets hatin’, ambivalent pro football watchin’ douchebag Ohioans. I know I will have failed if you have not all hanged yourself by the time I leave office.”