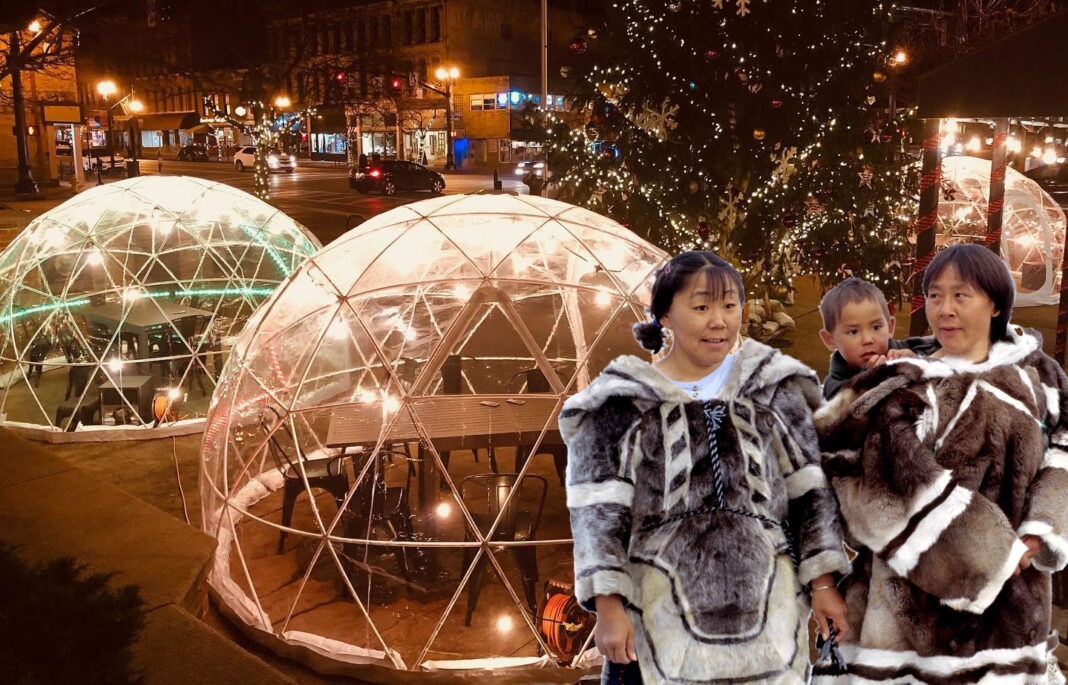 An Inuit family has moved into an igloo outside of Amato’s Woodfired Pizza in downtown Delaware, Ohio after relocating from their home in Nunavut, Canada.

Aput Apooprok said he was forced to move his family away from their ancestral homeland after 5G radiation began turning the fish gay.

“We first accepted the fish for their nature because nature gives us life,“ Apooprok said. “But the nature of the gay fish is selfish. It mates all day and never creates life.”

Aput’s wife, Aput2, and his 6-year-old son, Aput3, both joined him on the journey and now call Delaware home.

Amato’s owner Brad Paisley said the arrangement works out financially as they’re able to lease the igloo to the Apooprok family overnight while they are closed.

“It has obviously been a really tough year for the restaurant industry and this is an opportunity for us to make some extra money while helping out our new neighbors at the same time,” Paisley said. “We barely see them during the day. They’re generally wandering out in the woods somewhere, I think, gathering food down by the Olentangy River.”

The igloos were recently erected outside of Amato’s and other downtown restaurants to provide additional seating during the winter months. COVID-19 restrictions on indoor dining have limited their capacity.

“In the alleyway, there’s now a trash barrel of rotten fish ‘fermenting.’ They built a tannery to make new squirrel coats. They’re rendering and soliciting animal fats. I have employees sharing joints with them in the igloo village. It’s getting out of hand,” said Old Dog General Manager Leslie Stoneshoe. “We aren’t using the patio at the moment but come springtime, something will have to change. Our customers can live with the stench of wet dog out here but I think rotting fish and foreigners will be too much for them.”

Local Fish and Wildlife coordinator John Deary said he is aware of the Inuit situation and has his own concerns about the impact on local wildlife.

“Have you ever seen someone squeeze a fish until its eyeballs pop out and then smile up at the heavens looking for approval from their forefathers? Have you ever seen 2,000 fish have their heads bashed on rocks and then strung up in trees alongside the river? I witnessed that yesterday and have to tell you, I have some concerns,” Deary said. “These waterways aren’t used to this type of fishing activity. It isn’t sustainable. ”

City of Delaware Economic Development Coordinator Sean Hueybaby said he welcomes the Inuit to Delaware and that he is helping other restaurants lease their igloos. He expects downtown igloos to reach 95% occupancy by the end of January.

“We don’t really need the fish in the Olentangy River, but we always need to expand our tax base,” Hueybaby said. “Exotic women don’t have room for ‘no’ in their vocabulary, either, if you know what I’m saying. So, that’s a perk too.”