Today, a group of Delaware County officials passed a resolution opposing Issue 1, the proposed constitutional amendment on the November 6 general election ballot in Ohio. Officials explain that their decision was heavily influenced by an influx of bribes, kickbacks, and other incentives from third parties with vested interests in seeing the amendment defeated.

If passed, the measure would re-classify low-level felony possession of any drug, including fentanyl and heroin, as misdemeanors. First and second offenses would carry no mandatory jail time, while a third could result in a maximum sentence of 180 days.

County officials say they are grateful for the support received from organizations including, but not limited to: the Republican Party National Committee, conservative PAC Citizens for Community Values, the Ohio Association of Chiefs of Police, the Ohio State Bar Association, as well as a litany of others. Such organizations, committed to preventing the amendment to the Ohio Constitution, derive their current level of influence from the existing system and legislation; officials say that, without their support, the threat of change would be imminent.

“Helping people who actually need it sounds great in principle. It isn’t until you realize that doing so entails addressing the inefficiencies of our state and local government, relinquishing superfluous executive and judicial authority, as well as exhibiting genuine compassion. Our stakeholders don’t like risk, they don’t like feeling powerless, and they certainly don’t like the general population,” said D.C. based private prison lobbyist Don Uppcomance. 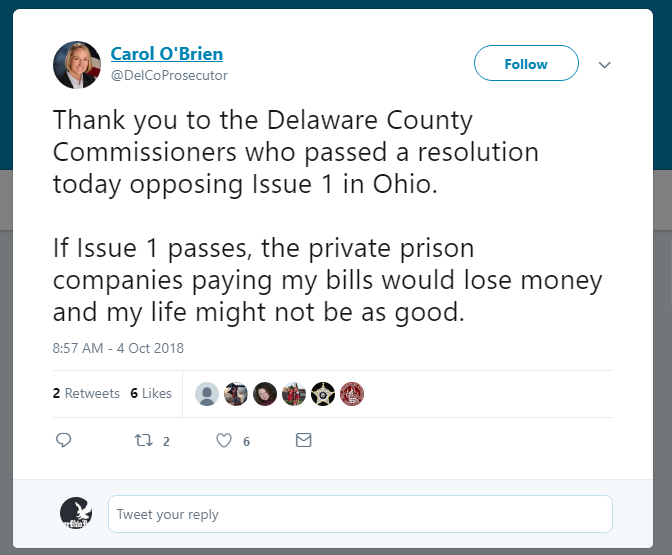 Replying to queries from Delaware Ohio News, O’Brien elaborated on the tweet.

“I was elected thanks to the wealthy, successful people of Delaware County. They trusted me to submit to them without question because I am a woman. They like things the way they are. I can’t see any reason why I shouldn’t give them what they like, what they want. It is what is best for the community.”