The Delaware City School Board approved a 2019-2020 education plan on Wednesday that will continue the teaching of Arabic numerals as part of the core mathematics curriculum.

The measure was passed by a unanimous vote despite a negative response from the community. A Facebook poll circulating this week showed that the majority of residents were against the proposal. 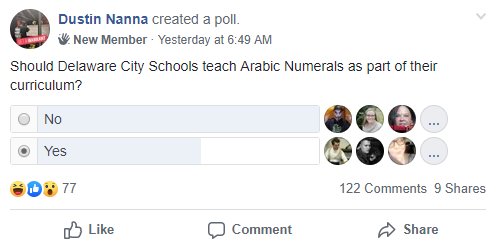 “My kid doesn’t need to understand how to count in Sand Ni**er,” Klansman said. “He ain’t gonna be counting nothing in Sand Ni**er except maybe bullets in their fucking heads! Fuck ’em!”

School board member Ted Backusthatassup says that Arabic numerals are critically important and must continue being taught in schools.

“Arabic numerals refers to the digits 0,1,2,3,4,5,6,7,8,9 that we are all familiar with. They are the foundation of counting and math and all of that shit. So yes, they are important,” Backusthatassup said.  “I am on the school board for a reason, folks. Trust me. I don’t want to groom jihadists either.”

Resident Gina White believes the school board is following an elitist, globalist agenda determined to turn children against American values.

“Arabic numerals? What else is there to say? We’re in America, not Arabicahah,” White said. “This school board is against the people and wants to turn our babies into suicide blankets for Chinese oil conglomerates and political vacuum cleaners. It’s not right. I won’t sit back and let my children learn something that I am too ignorant to understand.”

Asked for comment, incoming Delaware City Schools superintendent Heidi Kegley said she was either going to look for a job in a wealthier school district or commit suicide.