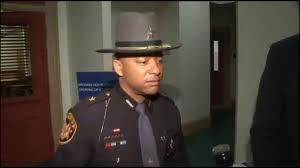 Walter L. Davis III was forced to resign after his “perfect amount of blackness” was called into question after using taxpayer dollars to fund an inappropriate relationship between his large black dick and a white female officer’s snatch.

After a Delaware Ohio News survey that showed that a majority of Delaware residents considered Davis to be the perfect amount of black to perform the duties of Delaware County Sheriff, his blackness proved to be blacker than expected.

“Turns out, I was much too damn black for this position,” Davis admitted, flipping through classified ads for an open janitorial position. “I long for a time when we can realize Martin Luther King Jr.’s dream of a day when we don’t judge men by the blackness of their dicks, but by the content of their character.”

“I just thought, you know, that he could be that perfect amount of black for our county,” Hasbeentin said. “But fucking a white lady cop on my dime? That’s way too black for this town. That’s like some shit you hear about on The Wire. Christ.”

Ohio Wesleyan sociology professor Burt Jorgles said Davis could have been the utopian black to watch over the community.

“Well, he’s black enough to scare the poor white trash in our community into acting like they are semi-decent members of society,” Jorgles said. “However, he’s not too black to scare the middle and upper-middle class whites out of Delaware and into Union County, where the sheriff’s department is more ethnically homogeneous. He also would have given young blacks in the community the hope that they may one day live the dream of placing handcuffs on innocent people. But he screwed all that up to steal taxpayer money to bone a white female officer. What a setback for the black community.”

Unemployed resident Tim Klanly said he was always suspicious that Davis was at least a little too black.

“When I said I was just a little uncomfortable with how black he was to Delaware Ohio News a few weeks back, I got a few raised eyebrows and uncomfortable glances from other white folks in my vicinity,” Klanly said. “Now I feel completely vindicated. All those self-righteous assholes who said he was the perfect amount of black have to eat his big black cock penetrating that sweet white cop pussy.”

“Look, homeboy always be whitin’ it up a little much, especially for the camera, y’know what I’m sayin?,” Jefferson said. “All I’m sayin’ is, you can’t be dat black and hide it foreva. Stealin’ shit and grabbin’ up all the good white pussy is jus’ in his DNA, ya heard?”

Moose Lodge regular drunk Gary Ballsingley said he doesn’t care about Davis’ shenanigans, because any amount of black is too black to be his sheriff.

“Look, I belong to the Moose Lodge, you should know how I feel,” Ballsingley said. “I hate black people and I think they should be lynched. Fuck Walter Davis.”

A Delaware Ohio News survey three weeks ago shows how much damage Davis did to his perceived amount of blackness in the community.

The survey, conducted over a six week period before Davis’ fall, demonstrated that 53 percent of Delaware County residents responded that Davis was “the exact, perfect amount of black,” when asked if he were too black to be sheriff. Ten percent said he was “a little more black than I’m comfortable with,” 11 percent said he was “not quite black enough but he’s still my nigga,” and 13 percent said he was “much too black to hold any position of authority.” The remaining 13 percent declined to comment because they either couldn’t speak English, or their offspring wouldn’t shut the fuck up during the interview.