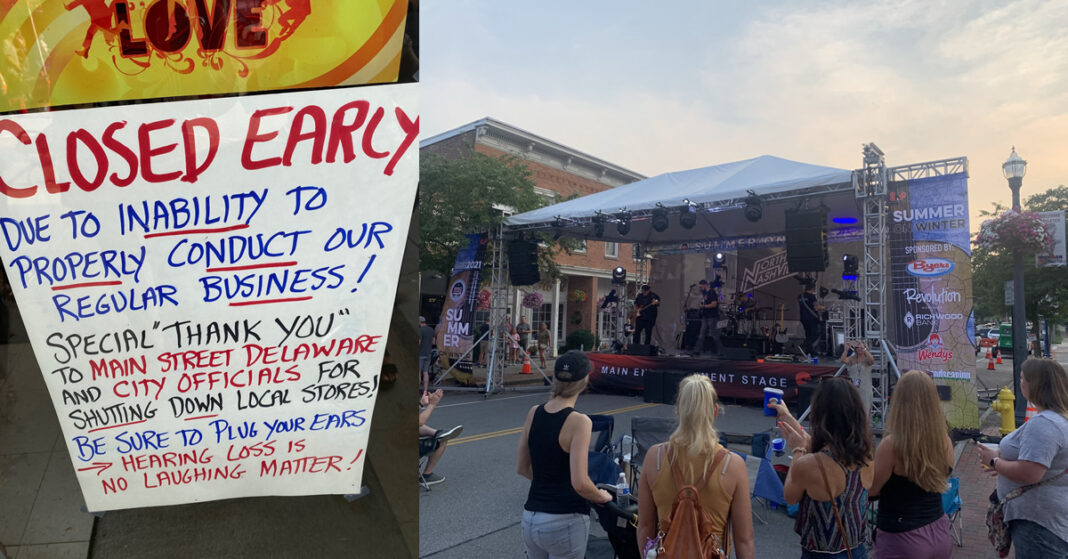 Main Street Delaware’s Summer on Winter Concert Series has a local business owner furious over alleged issues he says are bad for his business, including the influx of customers the event drives to his downtown storefront.

Pat the Music Man, owner of Pat’s Records on West Winter Street in downtown Delaware, left a fiery note on his door and closed his shop ahead of Wednesday evening’s concert.

“Closed early due to inability to properly conduct our regular business! Special ‘thank you’ to Main Street Delaware and City Officials for shutting down local stores. (Even though I decided to close on my own and not do business with the thousands of people who will be downtown tonight.) Oh, and be sure to plug your ears — hearing loss is no laughing matter! I also want to make sure you hear me next time I tell you to go fuck yourself!”

Music Man says the event is horrible for his business and pisses him off more than owning a record store in the 21st century.

“On a typical weekday evening, anywhere from zero to five people walk by my store. None of them come inside because I stare out the window at them and signal with my eyes that they better get away from me before I implode,” Music Man said. “That’s fine. I can deal with that. But on a night when Main Street is holding one of their concerts, thousands of people walk by my store, and dozens of them try to come inside and buy something. Their desire to support local businesses is the antithesis of punk rock, and I despise them with every spermatozoon left in my balls.”

Music Man also expressed dissatisfaction with another organization playing music on his block.

“I don’t care how great Main Street Delaware is for the rest of the community, how sexy Susie Bibler is, or any of the crap that other people talk about. All I care about is being the Music Man. That is who I am. Do you get it? I am the Music Man,” Music Man said, his lip quivering as he repeatedly punched into the soundhole of a guitar until his knuckles started bleeding. “I am the one who gets to play music on Winter Street. Walk by my shop, and you’ll hear whatever music I want to subject you to that day. Maybe it will be Ween, Marky Mark, Nickelback, you never know. Now Main Street Delaware has bullied their way into the market and started playing music. It is unacceptable. The Music Man isn’t going to take it.”

After bashing a guitar against the wall and threatening to hang himself on live television, Music Man was reminded that he wasn’t on live television and was being interviewed by a local satire website that intended to make fun of him for being an asshole.

“Look, don’t get me wrong here, I love music, just not when other people are playing it,” Music Man continued. “And I love running a business, too, just not one with customers. I call my store ‘the last record store on Earth,’ and it’s imperative that when we inevitably go out of business, I can organize a protest and blame everyone else for the decline of our society. The Music Man isn’t the problem here.”

Music Man then swigged an entire jug of Carlo Rossi and passed out in the alleyway next to his store.

Asked to comment on Music Man’s complaints, Main Street Delaware Executive Director Susie Bibler said that it was unfortunate he was so upset and that she had tried to include his business in the planning process.

“The Main Street Delaware Summer on Winter Concert Series is designed to bring people to downtown Delaware to support local businesses and enhance our community. We welcome input from all downtown businesses and are saddened to learn that Pat is disappointed in our efforts despite trying to involve him in the process,” Bibler said. “When I last contacted him, I was told that I do not understand rock and roll and that I should go fuck myself. We hope that he will have a change of heart and join us in the future.”