Composed of Seniors Rick George, Lucas Reynolds, Ryan Morgan and Chester Fydel, the team is the first in the school’s history to win the competition. Work on the project began several years ago when the team members were sophomores.

“I’ve never been able to simulate something so personal,” said Team Captain Rick George, “That’s what makes this game so impressive to me.”

The popularity of the game is slowly growing with the pre-pubescent crowd, a demographic chosen by the team to begin testing the game’s commercial viability.

Team member Chester Fydel said it was important to make the game appeal to both males and females, young and old.

“We have groin attachment controllers in order to accommodate both male and female users of all sizes,” Fydel said. “We really think this game will be fun for the entire family.”

“The game is just a bunch of different kinds of pornographic videos with a score in the top right,” Fydel said. “The different types of videos are like different levels. You start out on an easy level, with good looking people getting it on, but then it progresses toward some pretty sick shit. Level 67 is watching an obese man cut his dick off while dropping a deuce in a really nasty outhouse.”

The male groin attachment is a fake vagina that also judges speed and variation. The difference is that it gets wetter as the performance improves.

“I love the Siamese twin gang bang level the best,” said team member Lucas Reynolds. “I always kick my buddy Dave’s ass on that one.”

The game allows for one to four players. Consumers can expect to see the game on the market in early December 2012. 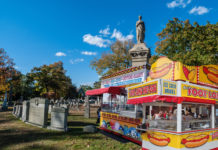 Crank Off Scheduled For Friday At Delaware County Fair 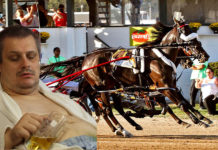