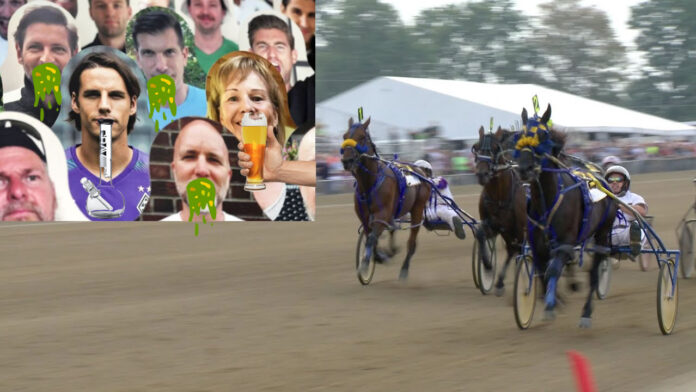 The 2020 Little Brown Jug may be running without spectators in the fairgrounds this year, but race organizers say they are designing an experience that will enable drunk virtual fans to appear in the stands and around the racetrack.

The experience will be similar to the virtual crowds used in recent NBA and MLB games, with some modifications designed to provide a more authentic Brown Jug experience. These changes include augmented reality (AR) graphics that will depict fans vomiting, passing out, flashing their genitals, and pouring beer on themselves.

The virtual fans will be displayed on large video screens surrounding the track and in the grandstands. A noise mix made up of fake and real crowd sounds will be piped into the fairground’s speaker system. The virtual fans and crowd noise will also be included in the television broadcast and live internet stream.

Among the few people that will be in attendance on Jug Day — including drivers, trainers, owners, and other race personnel — there’s a consensus that while nothing can come close to matching a live Brown Jug race with fans in attendance, the virtual experience will be better than nothing.

“It’s a tragedy that there won’t be fans this year, but I think the virtual fans and noise will be enough to get me in the zone,” said David Miller, a hall-of-fame driver who has a record-tying 5 Brown Jug victories. “I need to hear the people yelling things like ‘Let’s go, Miller, you motherfucker!’ and ‘My fucking mortgage payment is on the line, you son of a bitch!’ When I hear stuff like that, I know it’s time to put my goggles down and race.”

The virtual fans will include a mix of real fans watching from home as well as digitally rendered fans. Fans who want a shot at appearing in the virtual broadcast can register on the Little Brown Jug’s website.