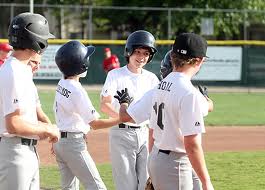 Midway through the regular season, the Delaware Ohio News (DON) Little League team is 10-0 and in first place in the Delaware Parks and Recreation summer league.

The upstart DON team is dominating the competition under first year head coach Oltice Walker Booth, who is proving to be a nightmare for opposing coaches and players.

The DON team is batting an incredible .375 at the plate, and has blasted 25 home runs. They have already broken the single season record of 20 home runs set by the Woodland Cigar Company team two years ago. Defensively, the pitching has been outstanding and has maintained a team ERA of 1.34.

Dave Coppington, head coach of the 2-8 Clancey’s Pub team, said everyone is terrified to face Lynnwood.

“My entire team purposely crapped their pants so we would have to forfeit after seeing him warm up,” Coppington said. “My team will apparently need a lot more booze next time to acquire the courage to face him.”

Lynnwood isn’t the only force to be reckoned with on team DON.

In Sunday night’s 12-1 win against the Chandra’s Bistro team, team DON shortstop Todd Snakely hit for the cycle for the first time in the history of Mingo Park.

“Me no rikey praying dem at all. Not at all,” said team Chandra’s Bistro pitcher Bong Wang.

Team Delaware Gazette, which is in last place at 0-10, has been the most anemic Little League team in recent memory. They have been shut out by every team except the drunken Clancey’s Pub team, who were scored on once while taking shots after a wild pitch. Their frail, misshapen bodies barely look human. They have been nicknamed “Team Paget’s Disease” by all other teams in the league.

Team DON faces the second place Amato’s Pizza team on Wednesday night. Team DON is favored by only 4 runs at this point, but has been steadily rising throughout the day. Hit up your closest Little League bookie soon to cash in on team DON.